Everything you wanted to know about phase dimming and were too scared to ask.

Phase Dimming is one of the simplest ways of dimming incandescent electrical lamps. With phase dimming of an incandescent tamp, the amount of power delivered to a hot glowing wire is easily varied to create a useful form of brightness control.

After the invention of LED lighting, Phase Dimming is still commonly used. Instead of a glowing hot wire, the LED lamp driver needs to interpret the phase dimming waveform and voltage to create a dimmed signal for the LEDs. This is normally in the form of reduced LED current.

Because LEDs make light in a completely different way to incandescent lamps, there are significant challenges associated with dimming LED lamps, and with the resulting behaviour of the lamp and phase dimmer.

Leading Edge phase dimming is typically performed using a Thyristor (Silicon Controlled Rectifier or Triac). It works by looking for the mains voltage 0-crossing, delaying a little, and then switching on for the rest of the mains half-cycle. 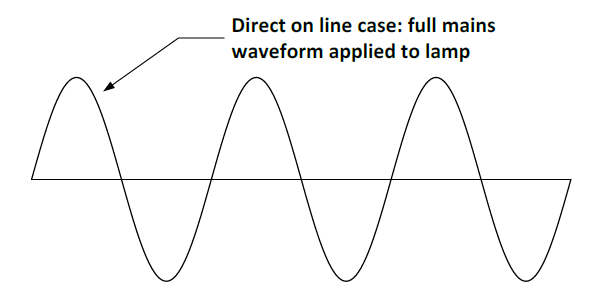 Trailing Edge phase dimming is typically performed using a MOSFET. It works by passing the mains voltage to the load, starting at the 0-crossing of each half cycle, and then switching the mains conduction off part way through the half cycle. 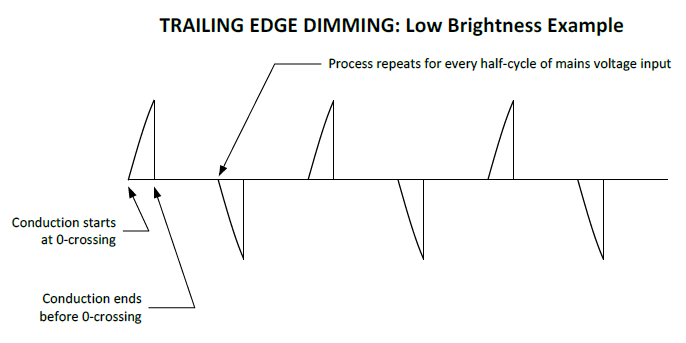 Leading Edge dimming has a delay after the zero crossing, and then a turn-on during the mains half-cycle.

Trailing Edge dimming begins at the zero crossing, and then has a turn-off during the mains half-cycle.

Both leading and trailing edge phase dimming deliver the mains voltage to the load in the form of pulses, and these have the shape of a sine wave that has part of the wave shape removed.

For an incandescent lamp, the hot wire has a thermal reaction time (“thermal inertia”), and the pulses are not visible. The effect is to deliver less average electrical power to the lamp.

For an LED lamp, the pulses of power also deliver less electrical power, but as LED lamps have a low power rating, the lamp and its driver need to:

Incandescent lamps just use the average electrical power supplied to pass through a resistive wire, which glows. The glowing wire makes light and heat.

When there is less power supplied because some of the voltage is removed (turned off), the effect is to put less energy into the resistive wire, which means it glows less. When it glows less, it makes less light and less heat.

A LED lamp, by comparison, can extract all the electrical power it needs from the short voltage pulses that a phase dimmer provides. The LED lamp therefore uses extra electrical circuits to measure the pulse width and the time between the pulses. From that information it works out a dimming level and adjusts the amount of electrical power to put into the LEDs.

Different LED lamp (or LED driver) manufacturers will have a different reaction to the phase dimming pulses.

This may show up as differences (from one lamp supplier to another) between some or all of these characteristics:

A dead-band is a range of brightness adjustment where there is no reaction (no change in the amount of light produced).

As shown in the above diagrams, the period of a mains half cycle when the phase dimmer is conducting is called “conduction angle” or “conduction time”. This is normally measured in milliseconds.

On a 50 Hz system, the conduction time can vary from between these theoretical limits:

Typical phase dimmers have these limits:

High quality phase dimmers, such as those designed by Ozuno have limits:

When comparing phase dimmers: a bigger range of conduction times provides the largest possible range of control inputs to a phase dimmable lamp.

If a phase dimmer produces a conduction time under the minimum that the driver operates with, this can cause:

If a phase dimmer produces a conduction time greater than the maximum that the driver operates with, this creates a dead band at the high brightness, where increasing the dimmer brightness setting has no effect.

Most DALI LED drivers will have a specified adjustable range, this may often be stated as “5% to 100%” or similar. Most LED drivers do not clarify if the range is electrical power consumption or brightness.

(The LED lamp and driver have an interaction with each other.)

(Because phase drivers can react differently to the same conduction time.)

When considering DALI phase dimmers and DALI drivers, the DALI standards require that complete system of phase dimmer + driver + LED lamp must comply with the DALI dimming curve which has a brightness range 0.1% to 100%.

Meeting this full range is difficult or impossible for many phase dimmer / driver / lamp combinations. Compliance with the requirements is achieved by means of:

The effect of this that many DALI phase dimmers may only work over a small span of the DALI dimming numbers – for example:

This table shows that a DALI Phase Dimmer that can only dim to 10% light output would have a DALI level of 170, so there would be a very significant bottom end dead band: setting a DALI level below that limit would have no effect on the phase dimmable lamp.

Ozuno RAPIX DALI Phase Dimmers (when used with suitable lamp and drivers) can do phase dimming over the full DALI span of 0 to 254, corresponding to 0.1% to 100% light output.

Compensation for the effect of reduced DALI dimming range

Unlike some lighting control system that re-scale the dimming range when a minimum level is set, the DALI system applies a minimum level by setting a limit, and adjustment below this limit has no effect. This creates a bottom end dead band, and for some DALI phase dimmers and LED lamps this could be significant.

Some DALI phase dimmers allow selection of a “linear” curve instead of the DALI logarithmic curve.

In general terms, the linear “curve” produces a different problem: the control range is “bunched” at the bottom end. This is because the human eye response is logarithmic, so for example, producing a measured reducing of light (lux level) to 10% of an original value is seen by a human user as a brightness reduction of about 50%.

The only time using the “linear” curve type is beneficial is for a subset of phase dimmable LED lamps that already include a logarithmic response. The only way to tell this may be trial and error.

Although the selection of “linear” seems a convenient solution, the result is usually a poor user experience.

Try and avoid showing levels as numbers or percentage.

Reason: When showing levels as a percentage, this gives a misleading impression of accuracy and precision – for example “1%”, if measured with a light meter, needs to be around 1% of the maximum level. Similarly, 10% needs to be measured as 10% of the maximum.

The large variation between LED lamps, drivers, and their behaviour in a phase dimming system means that the precision shown by a percentage level can never be guaranteed.

In addition, the dead bands at the top and bottom of the phase dimming range may be caused by the phase driver, or the lamp, or both in combination. The dead bands will vary from one lamp to another, and again, using percentage levels when there is a dead band causes a poor user experience.

Suggestions for a better user experience:

(Optional: mark with OFF / MAXIMUM)

Use bar graph with no numbers 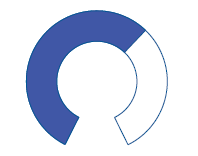 It is always best to avoid showing numbers.

Any visualisation or presentation software should be set to compensate for LED driver minimum levels (for example, making a transition from 0=OFF to [example] 145 = minimum level), and having suitable steps between the maximum and minimum levels.

Visualisations should avoid using numbers, which just lead to user confusion about what the numbers mean and why there are dead bands – an alternative presentation is usually better.

The Ozuno practical experience with DALI phase dimmers is that around 40 steps is all that is needed for a good user experience when adjusting lighting levels using touchscreens and similar devices.

Sign up to keep up to date on our latest product and software developments.

This website uses cookies to improve your experience while you navigate through the website. Out of these cookies, the cookies that are categorized as necessary are stored on your browser as they are essential for the working of basic functionalities of the website. We also use third-party cookies that help us analyze and understand how you use this website. These cookies will be stored in your browser only with your consent. You also have the option to opt-out of these cookies. But opting out of some of these cookies may have an effect on your browsing experience.
Necessary Always Enabled
Necessary cookies are absolutely essential for the website to function properly. This category only includes cookies that ensures basic functionalities and security features of the website. These cookies do not store any personal information.
Functional
Functional cookies help to perform certain functionalities like sharing the content of the website on social media platforms, collect feedbacks, and other third-party features.
Performance
Performance cookies are used to understand and analyze the key performance indexes of the website which helps in delivering a better user experience for the visitors.
Analytics
Analytical cookies are used to understand how visitors interact with the website. These cookies help provide information on metrics the number of visitors, bounce rate, traffic source, etc.
Advertisement
Advertisement cookies are used to provide visitors with relevant ads and marketing campaigns. These cookies track visitors across websites and collect information to provide customized ads.
Others
Other uncategorized cookies are those that are being analyzed and have not been classified into a category as yet.
SAVE & ACCEPT
Scroll to Top